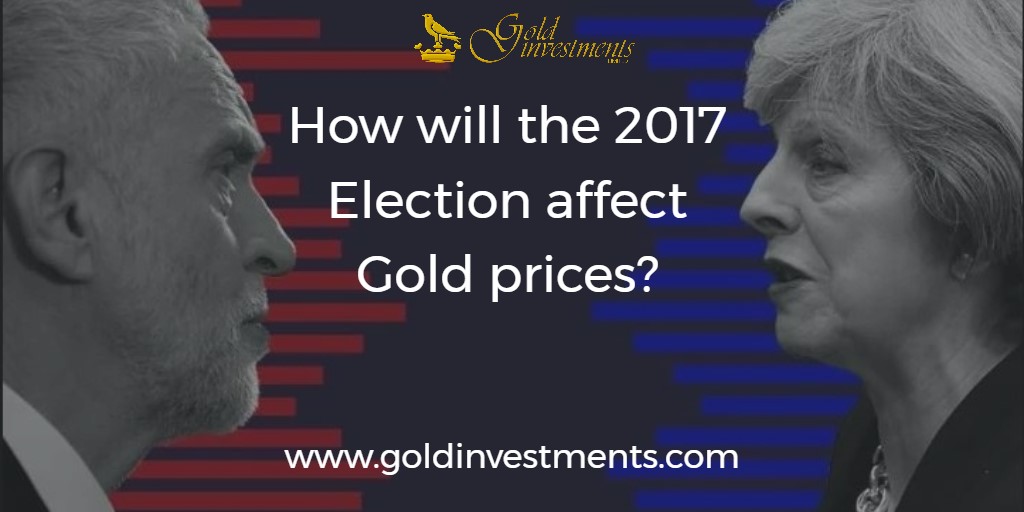 Gold prices today.The announcement by the PM this week of a snap election to be held on 8th June took the country by surprise. Brenda from Bristol echoed the sentiment of many when asked for her response to the election. She said:

"You’re joking? Not another one!

“Oh for God’s sake, I can’t honestly… I can’t stand this.

“There’s too much politics going on at the moment. Why does she need to do it?”

Stability In The Markets

However, investors like stability in the markets and are assuming that if the Conservatives are re-elected, the Party will be in a better position to negotiate the UK’s departure from the EU.

If an election had occurred in 2020, the chances are that the country would still be in the middle of transitional arrangements for leaving the EU. There would probably have been more economic uncertainty.

The PM may have also been swayed to hold an election after a slowdown in the economy, which looks likely to have grown by 0.4% during quarter one of 2017. This decrease is down for the last three months of 2016; the economy grew by 0.7% during the final three months of the year.

What does this mean if you are thinking about investing in gold? Is now the right to buy gold?

The pound’s strength this week may have had an effect on investor confidence with gold. After its biggest one-day drop in more than six weeks, spot gold prices have risen slightly by 0.2% to close at $1281.4 per ounce.

We think that gold will continue climbing this year. There is the upcoming French election now between Macron and Le Pen on 7th May, increasing tensions over North Korea and in the US, the Dollar fell this week. In New York, there were disappointing quarterly results from Goldman Sachs and Johnson & Johnson.

For the UK’s own economy, consumers are beginning to tighten their belts with the slowing down of real wage rises and increasing petrol and food prices.

Many UK businesses may also be holding off spending on larger infrastructure projects waiting to see what happens over the next year or so with the UK departure from the EU.

It’s up to individual investors but our advice has always been to consider gold as more like an insurance policy. So in other words you may wish to consider investing for the medium to long-term. Our view is that buying and selling gold quickly can be risky.

Gold, in our opinion, should make up no more than 15% of an investment portfolio.

You want a dealer that you can trust – a bullion house that is not only knowledgeable but also approachable too. Come and have a chat to either me or one of the team.

We’re one of the oldest bullion houses in the UK with City offices.  If you’re not able to drop in, you’re welcome to contact us via our online message system, email or on the phone: 020 7283 7752

You can also buy online – securely – through our website which offers some of the cheapest, quality gold on the market.

Why not connect also with me on LinkedIn?