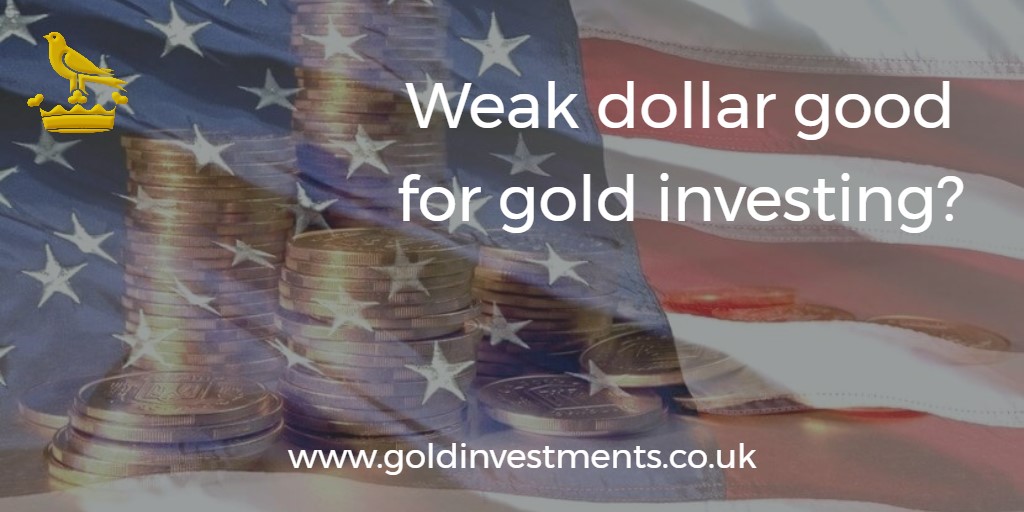 Buying Gold Online: Gold prices are driven by many factors but perhaps the biggest influence this week has been the performance of the US economy.

It’s no coincidence that gold prices rose because of disappointing US jobs data results – announced last Friday. Although the US Fed is still optimistic about the economy, it could mean that interest rate rises will be ‘dimmed’ at least for the moment.

When interest rates are lower, gold has always tended to do better – investors feel the precious metal offers better returns at these times.

Is this just a blip for the US economy?

Despite the US dollar strengthening – Trump made the announcement that there would be investment in infrastructure – the economy has been growing at the weakest pace in three years. In quarter 1 of this year, consumer spending barely increased. Trump has also kept commentators on their toes with various ‘wild cards’.

This is not, however, a true reflection of the US economy’s health. The country’s labour market has near full employment and consumer confidence has generally been high. This suggests that any consumer spending dips are probably temporary. The economy slowdown has been partly offset by improved business, firm exports and housing investment.

What’s the general mood with US business leaders?

Wall Street broadly has shrugged off Friday’s report and are expecting growth in the US to rebound.

A survey by the National Federation of Independent Business of business leaders showed that their optimism has reached the highest reading since 2004 and has lost only a little ground since.

So Friday’s job figures are unlikely to deter the Fed from its plans of tightening monetary policy.

Some investors may begin to feel that with the dollar potentially strengthening, gold may not be the best option. They may think that gold prices may drop when the US economy improves. We’ve discussed in this blog about Brexit and any economic uncertaintly surrounding it. This could certainly have a bearing on gold.

Last year following the Brexit vote, gold prices increased by 500% the next morning. The UK has yet to start formal divorce negotiations; if there are economic uncertainty ripples, expect the yellow metal to shine. Even more immediately than that we have the UK election. Depending on the outcome, investors could look towards gold which would push the price up.

What is also concerning is the situation between the US and North Korea. Any escalations of tensions will have an effect on the global economy particularly with Seoul, a key financial centre, being so close to its North Korean neighbour.

Yes, gold prices are responding to the US dollar this week but investors should bear in mind that there are many other factors which affect the price of gold. It makes investing in gold, for the short-term, fairly high risk which is why we always suggest that buying gold should be thought of as a medium to long-term investment strategy.

If you are thinking of buying or selling gold, including online, we would be happy to advise.

Please get in touch with either me or my team:

Oliver Temple is a senior bullion dealer at Gold Investments, one of the oldest bullion houses in the UK.