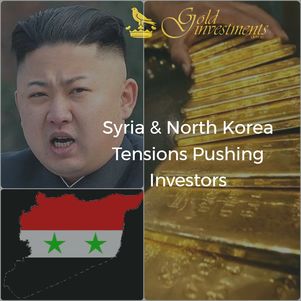 Investors are twitchy. When there is economic and political instability, it’s often precious metal which is seen as a safe haven. And gold prices have certainly been reacting recently, writes bullion dealer Oliver Temple.

Last week gold settled at its highest level in more than two months with its strongest weekly gain in four months.

Over our long years of trading – we’re one of the oldest bullion dealers in the UK – we’ve seen sudden demands for gold many times particularly during periods of uncertainty.

Back at the start of the year, for instance, gold prices on Tuesday, 17 January hit an eight week high at $1218 per ounce. World stock markets had reacted to the Prime Minister saying that Britain "cannot possibly" stay within the European single market after Brexit.

Gold’s climb in recent weeks is most likely to have been in response to the sabre rattling between the US and North Korea over its nuclear missile program. Trump has promised “fire and fury” – Kim Jong Un’s regime has said the entire United States is in its sights.

Last week, gold reached its strongest weekly gain in four months, settling at its highest level in more than two months. For now tensions seemed to have quietened down and gold prices have fallen back again.

But it’s a potentially dangerous situation and events could change rapidly. An armed conflict could easily arise if there is a miscommunication or miscalculation on either side. This would rock the global economy. Don’t forget also that Seoul – a key world centre – is relatively close to the North Korean border.

So whilst gold prices have slipped, many savvy investors will now be taking advantage by buying gold coins and bars now. They will be also be looking at gold rather like an insurance policy and shoring up their portfolios with the metal.

They will also know that it is better to view gold for the medium to long-term as historically – despite economic and political uncertainty – the metal has always performed well over time.

For Gold Investment customers, they will know that they will enjoy some of the cheapest prices on the market for quality gold coins and bars from a dealer they can trust.

Take a look now at our wide range of quality gold bars and coins.

We’re currently offering free delivery on all orders over £1000.