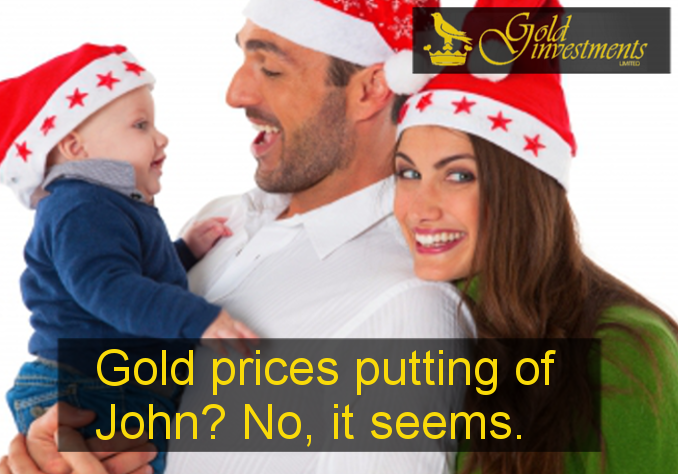 Gold prices: Businessman John Peters (50) from Ware, Hertfordshire is a relatively new investor to gold. It was a year ago in November that he was reviewing his own SIPP portfolio with his financial advisor.

“I typically had shares that had not performed as well as I had hoped. I suppose I started thinking about gold because of the then upcoming EU referendum when it seemed more likely that Brexit might happen, which of course it will now.

“Like many I was surprised about the decision. In a way I wish I had purchased gold earlier but I left it until after the referendum and actually at a time when gold prices had fallen.”

Gold has been around the $1,050 mark during the year but surged to 31%. Even in November, the precious metal was still one of the best-performing assets of 2016, with prices up around a fifth.

“I chatted with Oliver over a coffee. Like the rest of the team there, he was extremely knowledgeable and suggested various gold options. He also advised that the precious metal should be no more than between 10-15% of an investment portfolio.”

“As Oliver explained, gold should be thought of as a medium to long-term investment strategy. Yes, my gold portfolio has fallen in value recently – I had expected the price to increase after Trump’s win which it did before flat-lining.”

“One of the reasons that gold may have dropped recently was Trump’s promise to invest in infrastructure. This strategy could help to stimulate the US economy. The US has also raised their interest rates to 0.5%.

“Wall Street economists are predicting that US interest rates will increase again next year. Higher interest rates typically indicate a stronger economy. There can also be better returns on savings accounts. This can make gold seem less attractive for investors.

“What we will also be seeing more with gold prices in 2017 is a drop in demand in India. Forged larger notes in the country – often used to buy gold – have now been banned. So yes gold prices are generally low at the moment. That said we might see gold prices next year rise when Trump becomes president – it will depend how the world economy reacts.

"We might see some wobbling in the UK with our own economy and also Europe’s economy when Article 50 is formally triggered.
For investors like John, who might have been worried about falling gold prices, now could be a good time to buy gold.

The bars are all from LMBA approved refiners and the coins are bullion coins. View gold bars and gold coins here.

Oliver and all the team at Gold Investors wishes all those who have supported the business over the year a very happy Christmas and a happy 2017.

Case study for illustration purposes only. Image from Ambro at freedigitalimages.net