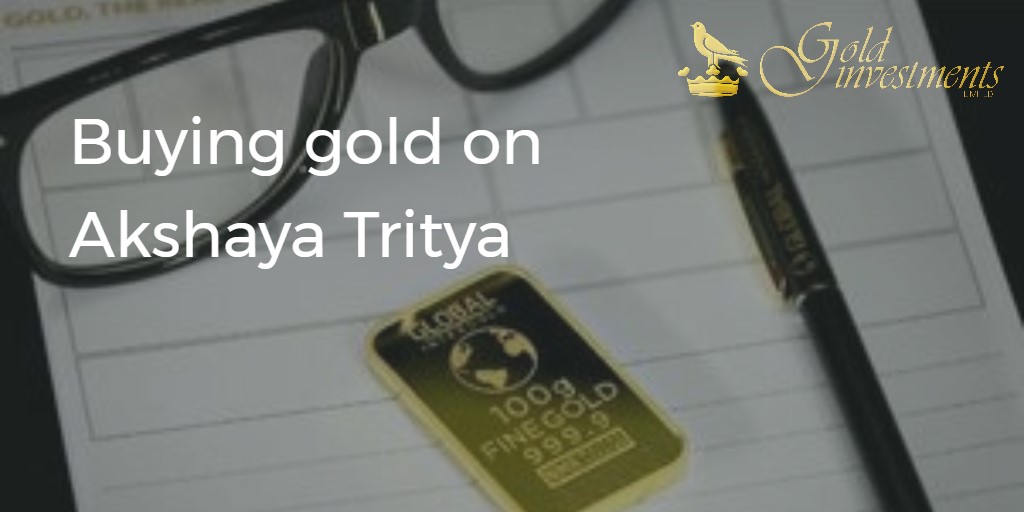 It’s a Monday lunchtime and City worker Bhadrak Reddy (47) is walking past the entrance of Leadenhall market and entering the offices of gold bullion dealer, Gold Investments on Gracechurch Street.

The dealer is one of the oldest in the country and has built up a first-class reputation particularly within the UK Indian community. Gold is significant for this sector of the population at this time of year because of the Akshaya Tritiya festival.

“I first came across Gold Investments online. Immediately, you can tell that they were a dealer that could be trusted. Sometimes you get a feeling. I follow – and still do – Oliver’s blog articles which are always informative. Their website is also clean and easy to use,” says Bhadrak who works in insurance.

But it was the personal service that changed Bhadrak from someone who browsed, into a loyal customer. Gold Investments is still very much a family business. It was Oliver’s father, Mike who founded the bullion house in 1981. Mike is still involved as is Oliver’s brother, Simon.

Christine Powter, John Clark and Jan Price are also long-standing members of the team. Jan recalls Oliver as a young 18-year-old when Gold Investments first traded in West Byfleet. Oliver used to help out during his summer holidays.

“Gold Investments comes across as a business that cares about its customers whatever size their budget is. When I was looking to buy the metal, I just wanted to purchase something small so I settled on two Sovereign coins worth then £200 each. They’ve gone up in value so I am very pleased but that wasn’t really point. The coins are just lovely to pass onto the kids”.

Sovereigns gold coins were first issued in 1489 during Henry VII’s reign. You can find out more here.

“In our family Akshaya Tritiya is very important to us. This year, I shall be buying physical gold on behalf of my brothers and sisters.”
Bhadrak does not intend to pass on the gold to them.

“I am purchasing on their behalf but they won’t see the gold unless they want to,” laughs Bhadrak. “That’s because Gold Investments are storing all our gold for us”.

The vaults where Gold Investments store their gold has its own fascinating history. They are in the world-famous London Silver vaults in Chancery Lane.

London Silver Vaults’ history can be traced back to 1885 – it was originally known as the Chancery Lane Safe Deposit Company. Despite a World War 2 bomb destroying the building above, the vaults remained intact.

“The building is open to the public. You signed in and go down a couple of flights of stairs. You then go through some thick security doors and there is a like a rabbit warren of shops selling a glittering an array of silver pieces such as plates and goblets. It’s well worth a look in its own right.

What keeps Bhadrak from going back to Gold Investments?

“Apart from the warm, friendly atmosphere, it’s their knowledge that also impresses me. Oliver, for instance, was able to give me different examples of when gold bars and gold coins went up and the reasons for it.

“Thanks to him, I now consider gold as a commodity that should be thought of as a medium to long-term investment. I think I would have been tempted to buy and sell quickly otherwise.

Is Bhadrak tempted to buy gold at the moment anyway this year?

“Certainly, I do feel that the metal is something that I should include more in my portfolio. Probably around 5% of my investments are commodities and I might want to look at increasing this by purchasing gold soon.

“I am following gold prices closely. They seemed to have steadied off [because of the 1st round of the French election] but I think if Marie Le Penn wins, it could affect all of the Eurozone. I am also worried about Syria and North Korea – I can see demand for gold being pushed up if peaceful solutions are not found soon”.

Bhadrak gets up, shakes Oliver’s hand and leaves the Gold Investment offices.

“It’s nice to meet Oliver and the team in person but equally you know you can trust them anyway just by looking at their website. The fact that they have been in business for such a long time, for me, says it all.

Happy Akshaya Tritiya from all the team at Gold Investments.

Take a look at our quality gold coins and bars here.