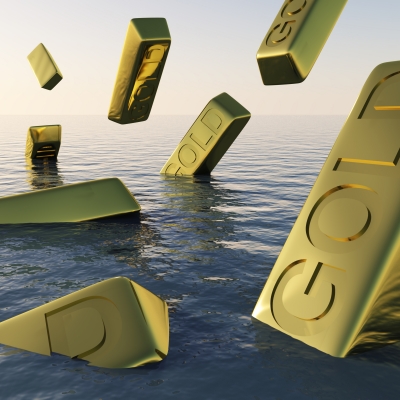 Gold Prices: With possible strong world economic headwinds ahead, Senior Gold Bullion dealer at Gold Investments, Oliver Temple, weighs up both sides of the arguments about whether the precious metal is likely to keep floating up or gradually sink back down to previous levels.

Staying or leaving? It is the decision that all of us in the UK will be making on Thursday 23 June when we vote on whether to remain part of the European Union or not.

The battle lines for both sides of the argument are now only beginning to be drawn.

No one knows how a Brexit will affect the UK’s own economy. We are in unchartered waters. Only time will tell on what side of the English Channel we will swim towards.

Depending on the outcome, the coming months and indeed years could see gold prices bouncing around more than a child’s dingy. Or on the other hand, gold prices could stay where they are – harder to budge than an anchor caught on the sea bed.

Analysts have very mixed views on how gold will perform.

traditionally thought as a safe haven in terms of economic uncertainty. Demand is driven by many different factors.

Possibly the metal’s increases seen at the start of the year have been as a result of investor nervousness over China’s slowing economy, low oil prices and the US interest rate rise in December.

Research released this week from The International Monetary Fund (IMF) has found that employment and industrial production can also impact yellow metal prices.

Some investor analysts believe the world economy will not suffer a major downturn. They believe the recent gold price climb has been down to market psychology (investor nervousness).

They also predict gold sliding back as a stronger dollar and higher yielding investments become more attractive to investors.

Some, however, are more pessimistic. Their view is that investors are not convinced that recent quantitative easing in the European Union will promote growth.

They also cite figures for Japan released this week which shows its economy shrinking by 0.4% in Q4 of last year. The yen has climbed because of imposed negative interest rates.

Chancellor George Osborne last month warned our economy was facing a "dangerous cocktail" of risks in 2016. He said these range from slowing global economic growth to volatile stock markets, and oil prices slumping.

The IMF this week said the UK economy’s recent performance had been "strong" in 2015. It added that the referendum on EU membership was a "risk and uncertainty". It said the weakening had come "amid increasing financial turbulence and falling asset prices”.

Let us take a look at the real facts for gold. The price of gold has surged 15% so far in 2016, the best start to the year in over three-and-a-half decades.

And looking back to 2015, there was a strong demand with investors buying gold even despite the yellow metal being at its lowest levels for some years:

• In Europe investment buying grew 12%.
• In the second half of the year, Central Bank net gold purchases hit 281 tonnes (10.2 million ounces). This was 170% higher than the first six months of the year.
• In the US Q4, coin and bar demand was up 15%.This was the highest level since 2011.
• Indian demand for jewellery was recorded at its third highest level in history.
• China’s gold coin and bar demands totalled 201 tonnes (7.1 million ounces), 21% higher than 2014.

One thing for certain is that gold prices are becoming increasingly hard to predict. But that could be said too of our own and the global economy. Our collective decision of the staying or leaving the EU could muddier the waters still further.

What’s our own view as one of the oldest gold bullion dealers in the UK? In short, we would advise gold to be thought of as a medium to long-term investment. Historically, over long periods gold has always performed well.

Now indeed could be a good time to invest particularly if the world economy does go into choppier seas.

On LinkedIn? Why not connect to Oliver?

Picture of gold bars for illustration purposes only – image from Stuart Miles at freedigital.net