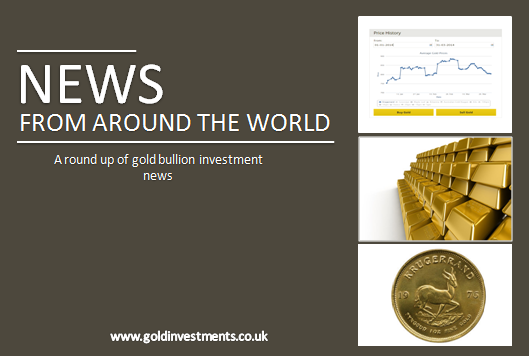 It’s the biggest percentage gain in more than a week as traders covered short positions after the precious metal slid to a seven-week low. This was following speculation of a possible June US Federal Reserve increase.

Central banks are continuing to buy gold. In 2015, a total of 483 tonnes were collectively added. China and Russia account for most of the activity. Central banks have been purchasing more of the yellow metal generally since 2010 with the last year being the most "robust year" of purchasing on record.

Venezuela’s gold reserves have plunged by almost a third over the past year. The OPEC country is grappling with a financial crisis that is leaving it struggling to feed its population.

Since February and March, the country has sold 40 tonnes of its gold reserves. The yellow metal now makes up almost 70% of the country’s total reserves.

One kg of gold hidden in a plane’s lavatory has been found at Kochi Airport, India.

The crew of a SpiceJet flight from Dubai found the bar after becoming suspicious of a passenger’s behaviour. Customs authorities have “detained” a passenger.

Gold Investments’ gold club members still have a chance to win a sovereign coin (worth around £220). The Gold Club is free to join. For more details click here.