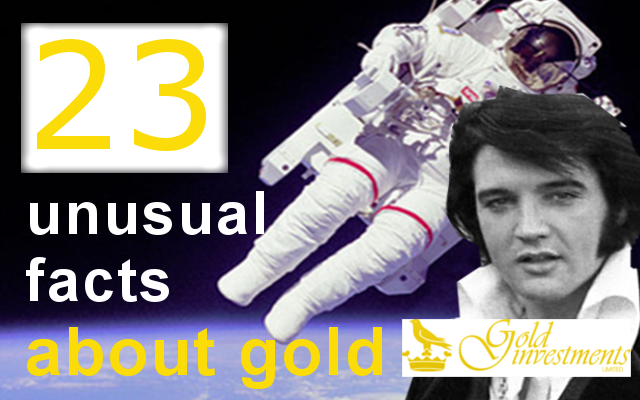 Here are some fascinating gold facts which you may not know from Gold Investments.

1. Gold is so thin that when hammered sunlight can shine through it.

2. To each of his soldiers, Julius Caesar gave 200 gold coins from the spoils of war (defeating Gaul).

3. Gold can be transmitted by nuclear reaction from platinum. However, because platinum is so rare, the process is far too expensive.

4. The precious metal is used in astronaut helmets (windows) to reflect infrared rays while allowing sunlight to pass through.

5. Gold is inactive, chemically. It is not affected by heat, air, ordinary solvents and moisture.

6. The yellow metal is a great conductor of electricity.

7. Pure gold will not cause skin irritations.

8. 49% of gold mined today is made into jewellery.

9. Gold is hardly used in its pure form because it is so soft.

10. Scientists believe that gold can be found on Venus, Mars and Mercury.

11. The largest gold coin ever made was cast in 2012 by the Perth Mint. It weighed one tonne and measured 80 cm in diameter.

12. One ounce of the yellow metal can be stretched to a length of 50 miles.

14. Gold can be used as part of Self Investment Pension Portfolios.

15. The human body contains about 0.2 milligrams. Most of it is in our blood.

17. 147.3 million ounces of gold are supposedly stored at Fort Knox.

19. Elvis Presley owned three cars which had gold parts instead of chrome.

22. There are currently 20 gold vending machines installed across three continents

Have you signed up to our Gold Club? Keep updated with the latest gold news and expert insight. There’s also our regular true or false competition and offers. It’s free to join, sign up today.

Please feel free to share this article by using the buttons on the left.

Images from Nasa and Ollie Atkins under the Creative Commons Licence.