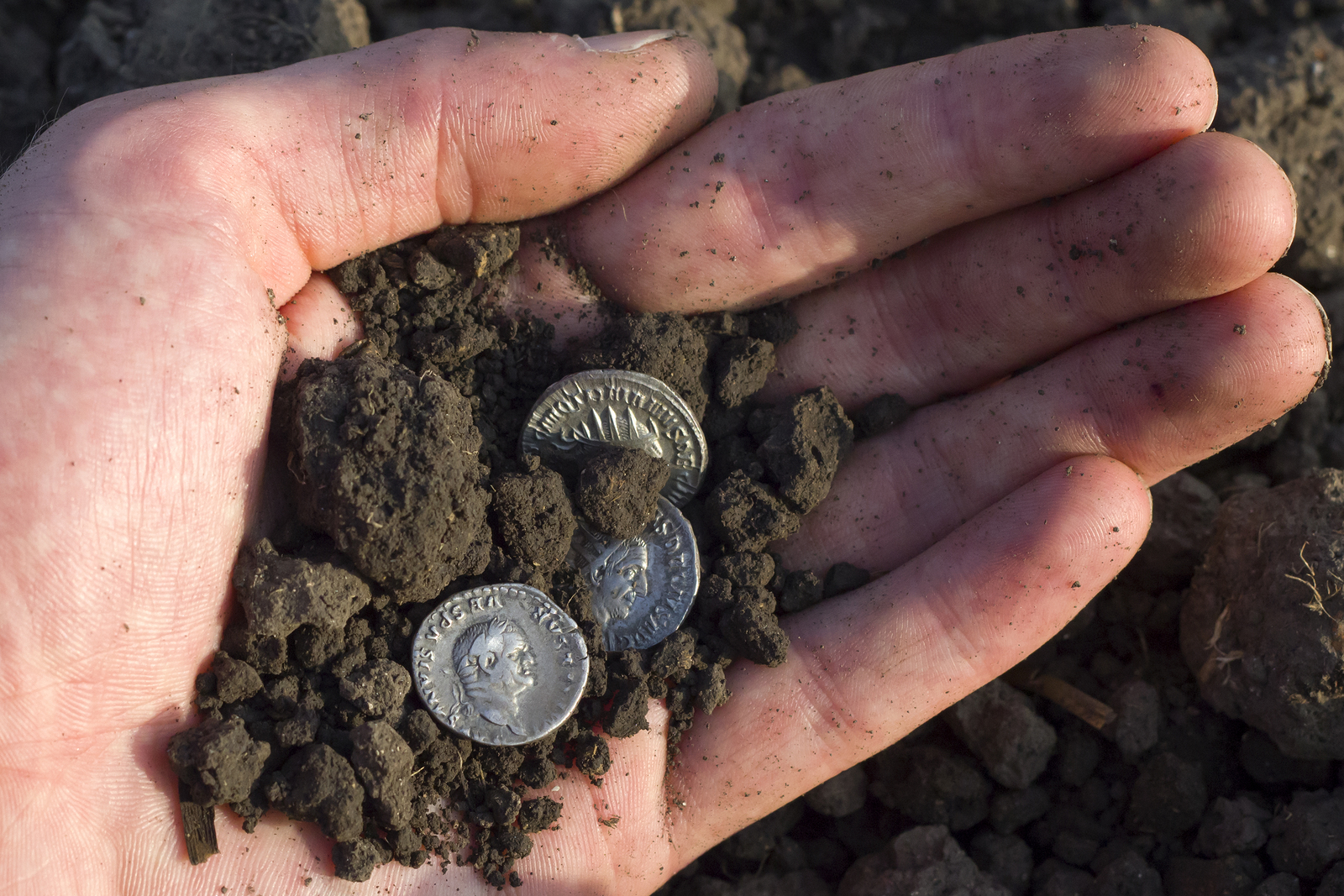 What links Bluetooth technology, a Viking king and a hoard of ancient coins? The answer is related to a discovery made by amateur treasure hunters on an Eastern German island called Ruegen, which is found in the Baltic Sea.

The treasure hunters, Rene Schoen and his fellow metal detectorist friend, Luca Malaschnitschenko, who is just 13 years of age, were searching in a field in the village of Schaprode when they came across what they thought to be a piece of aluminium. Once cleaned up and upon further inspection, they soon realised they had stumbled across something far more significant.

The Largest Hoard in The South Eastern Baltic Region

The find was quickly reported to the relevant authorities and the state archaeology office soon set about excavating the site. During this time the news of their find had to be kept quiet in order to allow the proper planning of the dig, which took some months.

The painstaking process was very much worthwhile, however, as the hoard consisted of hundreds of coins dating back to over a thousand years ago. All made of silver, the coins were in remarkably good condition and offer a fascinating insight into the history of the region.

So how does this relate to Bluetooth? Well not in a way one might imagine. King Harald Gormsson reigned in the 10th century and is probably well known for introducing Christianity to the region that consisted of Northern Germany, Denmark and the southern most parts of Norway and Sweden. One of the last Viking kings, he remains something of an icon to this day.

One of King Gormsson’s most noticeable features was a dead tooth that appeared strangely blue, giving him a nickname that has stuck to this day, Harald Bluetooth. When Ericsson invented the now ubiquitous wireless technology, it used the Harald Bluetooth as its inspiration and hence a 10th century Viking king, with a with questionable dental habits, has informed one of the most important technologies of the early 21st century.

Some historians, however, believe that the name Bluetooth is actually a mistranslation and that the blue in his name actually refers to dark. They have posited that the name really means “Dark Chief” or, at best, “Dark Tooth”. The fact “Bluetooth” managed to unite such a vast region under one religion through war is perhaps evidence of this darkness, but it is doubtful this would have inspired Ericsson to name their technology after him. The legend is often better than the reality.

Of the hundreds of coins that were unearthed, many were marked with the initials “HB” for Harald Bluetooth, making them instantly recognisable for the archaeologists at the site. These initials are also used to mark Bluetooth technology, although perhaps not in a style that one might read it. The HB is actually written in ancient runes, which were common to the Vikings during this era. This is why the Bluetooth logo, and initials marked on the coin, look the way it does.

OF the hundreds of other coins found in the hoard, the earliest is thought to be from the Damascus region and dates to around the late 8th century. The coins range from there until the late 10th century, which are of Frankish origin.

What Happened to Harald Bluetooth?

After uniting the region under Christianity, King Harald Bluetooth fled after losing a major sea battle to his son, the equally fabulously named Sweyn Forkbeard. Such wars were common of the era, with family members going to war with some regularity.

”Bluetooth” fled Denmark to Pomerania in the 980’s, just after the latest coins of the hoard were minted, and died shortly after in 987. His influence lives on in several ways, however, not least through the technology that bears his name.