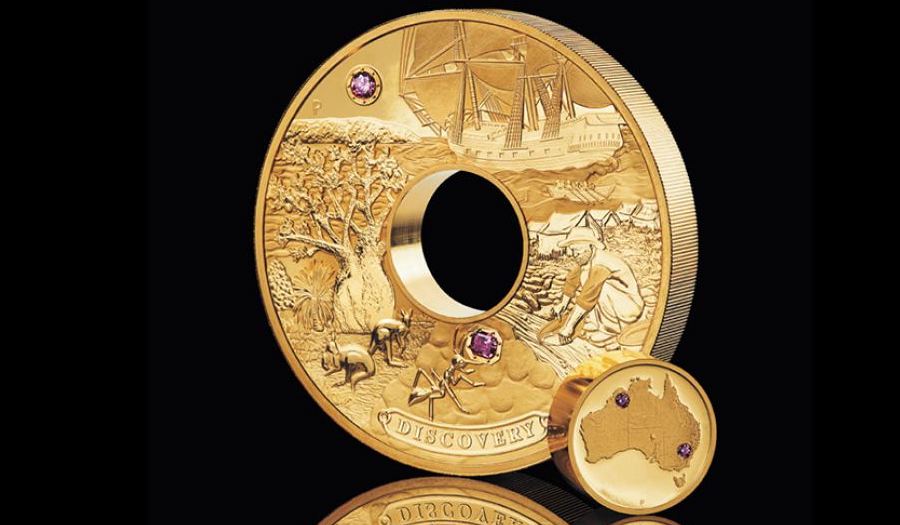 Australia has along history with precious metals dating back to its very own gold rush in the middle of the 19th century. So it is quite a statement to say that the Royal Perth Mint has produced the most expensive ever collector coin in the country’s history with the unveiling of the gold and Argyle Pink diamond coin called The Discovery.

The coin celebrates the country’s long history of precious material mining, with the depiction of a sailing ship and a prospector in a rowing boat in the diamond opulent region of Kimberly, which is found in the north of the country. It also shows a pan handler mining for gold in front of a row of tents, a familiar scene during the era in the region. Boab trees, for which the region is known, and kangaroos are also in the design, giving the coin its Antipodean feel.

One of the coin’s most unique features is the centre can be removed, in which a map of Australia is marked with precious two of the rare pink diamonds. The outer part of the coin also contains two of the highly valuable stones, one depicting the sun. The design is inspired by the country’s first currency, the Holey Dollar, which was first produced in 1814.

The Most Valuable Coin In Australia’s History

There are many things that can give a coin its value. It’s historical context and how rare it is are just two, but nothing quite guarantees huge value like precious metals and stones, of which The Discovery has plenty.

The coin’s gold content alone is of the highest purity, 24 carats, which makes the coin of significant value in and of itself. Add to this the fact that it is one of a kind, and is therefore highly collectable, and you have a coin of significant financial value.

Nothing, however, can quite compete with the four, extremely rare Argyle pink diamonds which adorn the coin, the largest of which measures 1.02 carats. So rare are these stones that it is said that you can easily hold an entire year’s production in the palm of one’s hand. In fact, pink and red diamonds typically fetch prices of more than 50 times those of white diamonds, with the most valuable selling for more than A$2.5m each. This has led to the coin’s price quoted as being A$2.48m, or £1.4m.

Hurry To Catch A Bargain

As of the time of writing this the coin has yet to sell and can be viewed at the Perth Royal Mint until the end of September, unless it sells in the meantime. Bids are currently ongoing, but the mint are confident they will reach its minimum value. While very few could even consider bidding for such an item, some might see it as a great investment due to the coin’s rare materials and one-off production. While coins with precious stones and metals have sold for similar values in the past, nothing quite matches The Discovery in terms of its uniqueness.