This last week has seen big swings in the foreign exchange market as sterling or cable has risen from $1.22 to a present level of $1.2850. Gold or in dollar terms, on the other hand, has remained fairly steady around the $1475 to $1515 range.

The gold price in sterling (xaugbp) has taken a hit from a high of £1240 last week to a present level of £1158. This move down in the sterling price has been due to the short squeeze in sterling as it looks, as of this writing, that PM Johnson will fail to get a deal to leave the EU on October 31st and might even ask for an extension.

One of the major reasons for the move higher in gold to £1280 in the beginning of September of this year, apart from gold strength in all fiat currencies, had been the fact that it looked like PM Johnson could leave without a deal on October 31st “come what may”. That stance of leaving without a deal “come what may” seems to have changed.

Despite all the noise and the fact that we will also see increased demand for gold during the Diwali Festival towards the end of this month the fundamental long term reason to accumulate physical gold has not disappeared.

The Federal Reserve has made a 180 degree turn from a stance of tightening policy through interest rate hikes and quantitative tightening to one rate cuts and renewed quantitative easing or QE. The ECB as well, under the stewardship of lame-duck President Draghi, also cut rates in its last meeting and announced more QE.

The troubles in the Repo Market have also not abated and aside from $60 billion in monthly QE the Federal Reserve will also be supplying what some call the plumbing of Wall Street with a total of $145 billion to support the overnight and term repo markets well into next year.

So despite the correction in the gold price one should focus on the fact that our current monetary and financial system is still very fragile and the main reason for that is all the debt that had to be incurred since the Crisis of 2008 to keep the system running. Unfortunately, the only way to keep things running is through more debt creation and money printing as we are seeing occur again under the leadership of the Federal Reserve and the ECB. 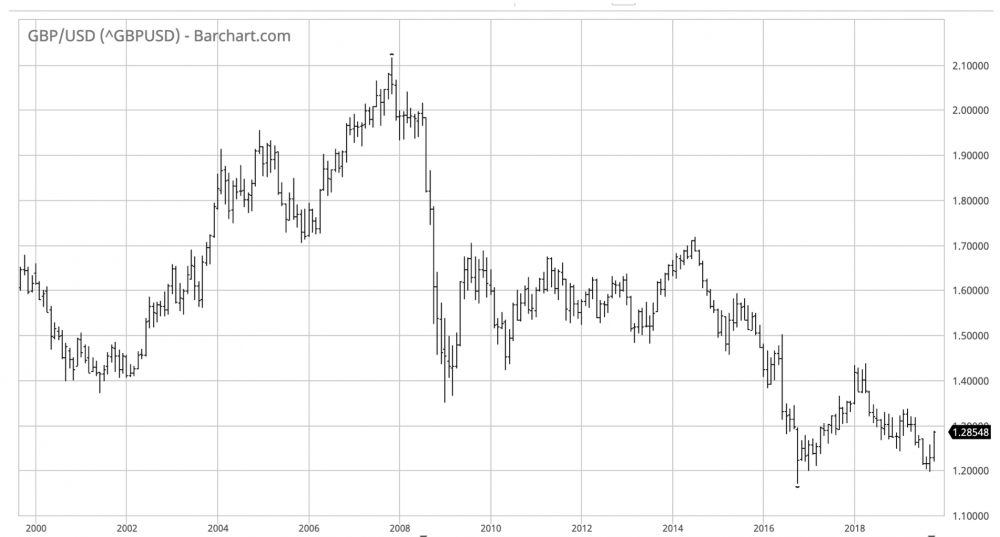 The time-tested way for governments and Central Banks to lessen the burden of debt has been currency debasement and, in my opinion, that will not come to a halt anytime soon whether the U.K. leaves with or without a deal or even leaves in name only. The chart of cable or gbpusd above shows currency debasement started way before the vote to leave the EU.

For more information and up to date economic views click here.